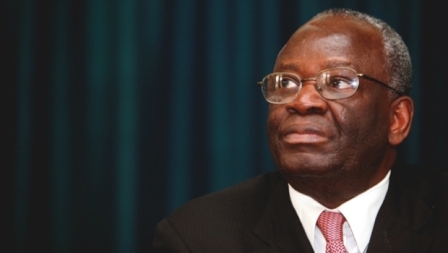 What You Don’t Know About Buhari’s New Chief of Staff, Ibrahim Gambari

It’s no more news that Nigeria’s President Muhammadu Buhari has appointed former UN’s dictator envoy Prof Agboola Ibrahim Gambari as the new his new Chief of Staff, although there is no official statement from the presidency or Aso Rock Villa about the appointment.

The appointment of Ibrahim Gambari means that he will release the late Abba Kyari, who is regarded as Buhari‘s most trusted ally when he’s still alive. With the new chief of staff about to begins his career in the Aso Rock Villa, here are some interesting facts about Buhari‘s new chief of staff.

Before we continue, if you want to know about Ibrahim Gambari‘s Biography kindly check here for more details.

Professor Ibrahim Gambari, who some people claim is an intelligent man, used his ‘intelligence’ to defend the draconian policies of the Abacha regime while he was Nigeria’s Permanent Representative at the United Nations. He was one of Abacha’s equivalents of the “Goebel” representing the infamous dictator with vigour and a propensity that could only be found in fascist Italy of old ”.

That’s an excerpt from Publisher of Sahara Reporter, Omoleye Sowere in an article titled ” Prof. Ibrahim Gambari And June 12: The “Un-disgraced” Collaborator By Omoyele Sowore ”.
But in an in-depth article by Colum Lynch for Foreign Policy in 2010, Ibrahim Gambari was profiled as a ” The U.N.’s Dictator Envoy ”, and it reads below.
Sometimes in 2010, the United Nations sent its favourite dictator-whisperer, Nigerian diplomat Ibrahim Agboola Gambari, to Sudan, hoping to nudge the country’s leader and alleged war criminal, President Omar Hassan al-Bashir, toward peace. Gambari, a veteran of U.N. missions from Zimbabwe to Myanmar, has developed his knack for counselling autocrats on the job — by working for one, Sani Abacha, the notorious late strongman president of Nigeria, whom Gambari served as U.N. ambassador from 1990 to 1999.

Anywhere else, Gambari’s Abacha connection might be a career breaker. But since joining the United Nations in 1999, Gambari has thrived, managing crises from Angola to Cyprus and raising money for Iraq’s reconstruction. According to U.N. staffers, his old-school capabilities as a diplomat, coupled with his Muslim faith and eminent standing in Africa, making him a formidable mediator. The Sudan assignment provides an opportunity to test whether Gambari’s experience and easy rapport with unsavoury political players can translate into concrete progress on the main challenges of the day: a settlement in Darfur and resolution of the standoff over the South’s quest for independence.

Dictators are Gambari’s specialty. Over the last decade, he has become the United Nations’ go-to guy to coax despotic rulers out of isolation. In 2006, as Zimbabwe’s economic crisis became a dire calamity, then-U.N. Secretary-General Kofi Annan sent Gambari to push Zimbabwean President Robert Mugabe into ending a crackdown on poor urban settlers and permitting foreign aid workers into the country. Gambari’s diplomatic initiative was intended to culminate the following year in a visit by Annan to Zimbabwe. But Mugabe nixed the plan. “Mugabe just told Kofi Annan to his face, ‘Don’t come,’” recalls Gambari, who blames Western countries for failing to arm him with sufficient incentives. “‘You are coming empty-handed, the West is giving you nothing, and all you are going to do is to lecture me about what I’m doing wrong in Zimbabwe.’”

As U.N. ambassador, Gambari vigorously defended the Abacha regime’s execution of Ken Saro-Wiwa, calling his group of activists “common criminals.” But he also pushed a progressive foreign policy that included sending Nigerian peacekeepers to Sierra Leone to restore democratic rule and pressing for action to halt the Rwandan genocide, even as his boss violently repressed political opponents at home. “If you didn’t know about Abacha, you’d think Gambari represented an enlightened African country,” says New Zealand’s former U.N. ambassador, Colin Keating, who sat next to the Nigerian on the Security Council during the Rwandan genocide.

Today, Gambari is more than willing to use his past as a dictator’s envoy as a selling point when talking to military rulers, such as Burmese junta chief Than Shwe. “To get a foot in, to get a hearing, I felt that background, my background, helped me tremendously. And they listened,” he says.

Despite Gambari’s lobbying, however, Myanmar has shown little sign of bowing to international pressure to embrace democratic reforms or release the country’s jailed political leader, Aung San Suu Kyi, ahead of this year’s national elections. And Than Shwe refused to meet with Gambari during his last mission to the country. But Gambari argues his persistent efforts to engage Myanmar have been vindicated and that U.S. President Barack Obama’s administration is now following his lead: “The language the Americans are using now is almost verbatim from what we said.”

In his new job, Gambari will head a joint U.N.-African Union peacekeeping mission for Darfur that, when fully deployed with 26,000 blue helmets, will be the largest U.N. peacekeeping operation in the world, with a nearly $1.8 billion budget. He will also be the most senior U.N. official with direct access to Bashir.

But Gambari’s past is again surfacing as an issue. Some U.N. staffers think his standing as the top U.N. envoy from Africa will give him clout in Sudan, but they are concerned that a former advocate for an outlaw regime won’t be sufficiently tough on Khartoum. Already, Gambari has aligned himself with the Sudanese leader on the most critical issue the country faces, an upcoming referendum on whether to allow South Sudan to break away into a separate country. “Personally as a Nigerian, as an African, obviously I would prefer the unity of Sudan,” he told me.

Gambari’s early concession to Khartoum could be pragmatism, or it could reflect a habit of meeting the demands of powerful rulers. “Gambari is a very wily operator. He has been able to move effortlessly between these two worlds of authoritarianism and liberal democracy,” says John Prendergast, co-founder of the Darfur advocacy group the Enough Project. “He’s a very intelligent and insightful guy, but it’s still to be seen whether he will be able to have any impact or whether he will simply be another placeholder in a long line of people who have had almost no impact on the situation in Sudan.”

Davido Returns Back to Basic of Music Production, As He Becomes Music Producer On Peruzzi’s Forthcoming Album
From 5G As Carrier of Covid_19 to Virus Escaped Chinese Lab & Bill Gates’s Anti-Christ Vaccine… Here Are Top 10 Conspiracy Theories For 2020
Advertisement