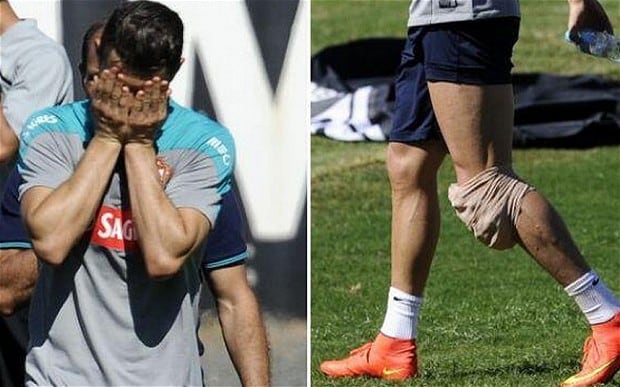 Cristiano Ronaldo Is Suffering From Incurable Injury, And It’s Getting Worse Over Time

Over the past few years, Cristiano Ronaldo has cemented himself as one of the greatest football players of all time, with his luxurious achievements on the field of play for several clubs he had played for, and his home country, Portugal.

However, during the course of the outstanding career, he had won five Ballon d’Or awards, the European Nations Cup completion holds countless trophies and records. He’s, in fact, an iconic football legend, there’s no debating on that.

Over the past 15 years, we’ve enjoyed and cherished every memorable moment of Ronaldo immersed talent, but it looks like we are experiencing the closing stages of Cristiano’s career. Although, it’s not because he’s about to hang up his boots, but because he’s suffering from an incurable injury he sustained in 2014,  and it’s getting worse over time.

But actually something is wrong with the ex-Real Madrid superstar, as he’s suffering from a knee injury called ‘tendinosis’ since 2014 – which has no cure. Tendinosis can be very problematic, because Spanish Tennis superstar Rafael Nadal has suffered from it, and it took him eight months off from the court between 2012 and 2013 to recover.

“Recovery times for tendinosis depend on the scale of the damage, but in the most severe cases could be several months,” BBC Health and Science reporter James Gallagher said after Ronaldo’s condition was confirmed.

In a detailed Twitter thread created by @laligafrauds show the impact of tendinosis in Ronaldo’s decline career from 29. “This injury is responsible for Cristiano’s sudden decline at 29, not his age,”

The thread explains how Ronaldo’s fitness routine and diet hasn’t been able to stop the effects of tendinosis, which has resulted in his knee becoming worse every time it’s used.

Check out the thread here…

This injury is responsible for Cristiano’s sudden decline at 29, not his age.

First I will explain the injury, then its impact on football with proof (stats). pic.twitter.com/6HbKWmDpQn

About 17 years ago, Ronaldo burst onto the world stage as a winger but has played more centrally in recent years, with this chronic knee issue the mooted reason.

Its not inflammation, it’s degeneration. There is a thing called ‘collagen’ which rebuilds your fibers after overusing them…Tendinosis weakens your collagen EVERYTIME you use your knee. 😱

This means your knee cannot fully recover after exercise.

His knee is LITERALLY degenerating every time he runs. He cannot stop or reverse the process. The best he can do is slow it down. 😢 pic.twitter.com/EsciynEH74

Best solution to the injury? (No cure yet)

It is reccommended to rest the knee for 8 months to completely heal this injury (and even then its not 100%, but maybe 95% healed).

Rafa Nadal had tendinosis and was forced to stay eight months out of tennis. 😱 pic.twitter.com/YMX9ygXGz2

It puts into perspective how hard ‘CR7’ has worked over the last six years considering the success he has achieved.

Since 2014, Ronaldo has won four Champions Leagues and two La Ligas with Real Madrid as well as a Serie A title with Juventus.

He also won Euro 2016 with Portugal as well as the inaugural Nations League competition in 2019.

The thread then goes on to compare his stats with longtime rival Lionel Messi following the injury, with the stats showing he couldn’t match the Argentine’s numbers.

FINALLY, THE MOMENT YOU HAVE BEEN WAITING FOR. 🧐🧐🧐🧐🧐

Now the juicy part. 🤔 How did this ultimately affect his performances?

His injury became a real issue after Madrid beat Bayern 4-0. So lets see how well he did in the year of 2014, BEFORE and AFTER, the Bayern game. pic.twitter.com/wIlJEkQnar

Ronaldo clashed with Payet on the same injured knee, forcing him to be stretched out of the final. This clash did not hit the same area where he was injured, but it damaged his knee ligament, making his knee overall weaker than before.

And the decline got worse… pic.twitter.com/px9f75pod5

This is Messi at the same age as Ronaldo (29). BEFORE v AFTER.

Why didn’t Messi’s stats decline as he got old? He kept improving actually, so Ronaldo would have as well. pic.twitter.com/Vq4O3xHCTF

This is Ronaldo BEFORE v AFTER knee injury:

You see the difference? Both same age, but Ronaldo declined while Messi improved. The difference is not age, its the injury. pic.twitter.com/HZDM2dnDBx

Continue Reading
Advertisement
You may also like...
Related Topics:Cristiano Ronaldo