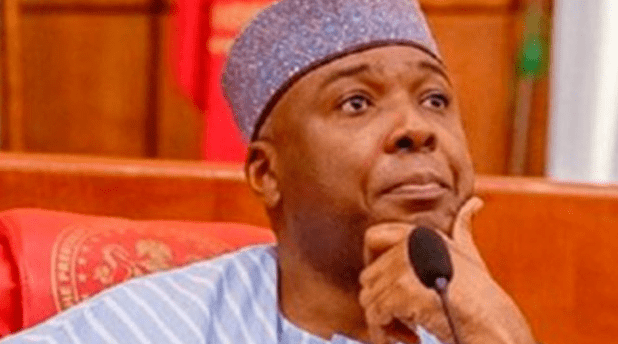 In 2011, Bukola Saraki retired his father, Olusola Saraki, from politics by backing Abdulfatah Ahmed against Gbemisola, his own younger sister, in the governorship race. Their father had been the godfather Kwara politics for decades and the popular saying was: “Anywhere Saraki goes, Kwara goes.”

After controversially installing Bukola, his first son, as governor in 2003, Saraki – who was senate leader in the second republic – wanted the younger sister as the next governor and pulled every trick in the book. He failed, Bukola had his way and the conclusion was that Kwara now had a new godfather.

Well, not for too long. Bukola’s reign lasted for exactly eight years. He will not be returning to the senate and, except his party,the PDP, wins the presidential election and he gets a key position, the senate president may be on his way to political oblivion.

The nation’s number three citizen was defeated in the Kwara central senatorial district race by Ibrahim Oloriegbe of the All Progressives Congress (APC) who polled 123,808 votes to defeat Saraki’s 68,994 – a margin of 54,814.

A former governor of Kwara state and two-time PDP presidential aspirant, Saraki’s defeat is the biggest news so far in the 2019 general election. Here are five possible factors that may have caused Saraki’s fall.

THE ‘O TO GE’ MOVEMENT

For some years now, Kwara residents have been under the leadership of the Saraki family, a culture many refer to as the ‘Saraki dynasty’. Saraki’s late father, Olusola, was known for installing governors. In 2003, his son took over from Mohammed Lawal as governor of the state, an office he held for two terms. From there, he proceeded to the senate form where he is said to have been calling the shots in Kwara.

But as time went by, the people were said to have been “fed up” of the influence from Saraki’s family and gradually, a popular movement known as ‘O to ge!’ began. Loosely translated as  ‘enough is enough’, the movement – or revolt as you may wish to call it – was spearheaded by key political figures in Kwara including Abdulrahman AbdulRazak, APC governorship candidate in the state, with the help of prominent figures there such as Lai Mohammed, minister of information and culture.

Time and again, Mohammed lamented about the “Saraki dynasty.” The minister once said: “The main issues here have to do with how our state has been governed in the past 50 years, 40 of which have been dominated by a single family. What has happened to the commonwealth, which has been cornered by a single dynasty at the expense of the people?”

Fun fact: With what we understands that some of the voters did not even know the name of Saraki’s main challenger; they were simply motivated by “O to ge”.

End of the Saraki Dynasty? How ” O to Ge ” Movement And Offa Robbery Caused A Revolt for Saraki In Kwara Politics

THE BUHARI FACTOR – WITH AN ASSIST FROM LAI

Another key factor that led to the ‘downfall’ of Saraki is the popularity of President Muhammadu Buhari. The president, it was gathered, is even more popular than Saraki in in most parts of the state.

Interestingly, as the results of the presidential election tickled in, figures showed Buhari was having a comfortable lead in Kwara against Atiku Abubakar of the PDP, despite Saraki being his (Abubakar) campaign director-general.

Apart from the fact of the dwindling influence of the Saraki family following the ‘O to ge’ movement, the presence of Lai Mohammed, the information minister, helped boost the president’s popularity. In fact, in the build-up of the elections, Kwara was one of the major states of interest for the president and of course, the minister acted as the president’s front as events played out.

SORE RELATIONSHIP WITH THE PEOPLE

It is believed that Saraki’s not-so-good relationship with the people of Kwara robbed him of some votes in the senatorial election.

Some residents who spoke to TheCable  claimed he does not have a good relationship with the people like his late father Olusola. “He is not free with his people like his father was,” a resident said when asked about the senate president. “People used to throng to their house when the father was alive but not anymore.”

On April 5, 2018, armed robbers attacked banks in Offa, Kwara state, killing 33 people, including pregnant women and 12 police officers. It later emerged that some of the suspects had links to Saraki and the Kwara state government. This created a major PR disaster for Saraki as he became publicly involved in a spat with the police hierarchy.

The tragedy shook Offa to his very roots and apparently tarnished the image of Saraki in the state, and this might have contributed in no little to cutting down his influence and hurting his political fortune.

While addressing a press conference in Lagos earlier this year, Oloriegbe had accused Saraki’s family of not sharing in the “common heritage” of the people of the state. He also made it a point of duty to restore the state’s “lost values”.

The APC candidate had said: “In the past 16 years, our society has been in the grip of people who do not share our common values and heritage. They are dealers whose concerns are at variance with the people’s aspirations. They are leaders with (an) inordinate appetite for wealth acquisition. They are political voyagers and power merchants. They don’t share our Islamic values and culture of leadership.”

A key factor that dealt a massive blow on Saraki’s ambition is the “poor welfare” of workers in Kwara state. Residents who spoke to TheCable complained the civil servants both at state and local government levels are usually not paid their salaries – and when they eventually get them, the salaries come in percentages.

“Sometimes, they pay workers as low as 30 percent,” a resident said, adding that workers have been abandoned over the years.

But Saraki is not the governor – so why direct their frustration at him? “Ask a typical Kwara man what his issue is and he may tell you Saraki has no paid us,” another resident told TheCabe. “It is true he is not the governor but he is the one calling the shots; so the people know if Saraki wants salaries paid, they will be paid.” Many believe that Kwara resources are still under his control.