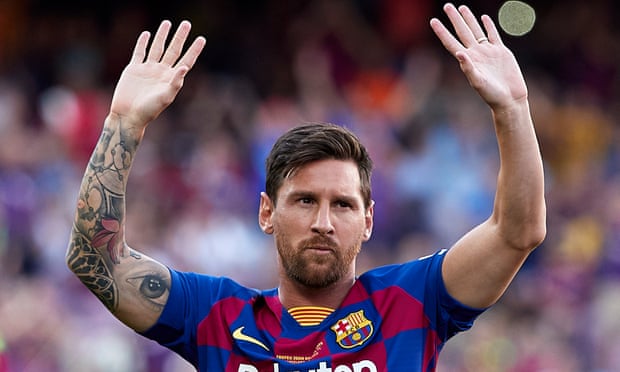 End Of An Era, Lionel Messi to Leave Barcelona

The Spanish giants Barcelona FC has announced the departure of Lionel Messi from the club after the already agreed renewal contract by both parties became was impossible, due to financial and structural obstacles.

The Argentine talisman Lionel Messi spent his entire club career at Barcelona‘s Nou Camp since making his debut in 2004, was expected to sign a new deal after his previous contract expired in July. But the club has now officially confirmed that their all-time leading will not be a member of the club’s squad in the coming season.

Here’s the club statement below:

“Despite FC Barcelona and Lionel Messi having reached an agreement and the clear intention of both parties to sign a new contract today, this cannot happen because of financial and structural obstacles (Spanish Liga regulations),” the club said.

“As a result of this situation, Messi shall not be staying on at FC Barcelona. Both parties deeply regret that the wishes of the player and the club will ultimately not be fulfilled.

“FC Barcelona wholeheartedly expresses its gratitude to the player for his contribution to the aggrandisement of the club and wishes him all the very best for the future in his personal and professional life.”

On the 30th of June, Lionel Messi’s 4-year/$674M deal, which is the highest wages in sports history comes to an end, but the club and Messi come to an agreement on 5-year/$420M deal — a 50% pay cut in July, but hours ago Barcelona announces Messi will not return due to “financial and structural obstacles.”

Messi has made 778 appearances for Barcelona, scoring 672 goals which have helped to secure 10 league titles, four Champions Leagues, and three Club World Cups among his haul of 35 trophies.

Barcelona needed to move players out to renew Messi’s deal and they have not been able to find the solution. The club, whose total debt is about €1,173m, is constrained by the league’s salary cap. Messi has agreed to a 50% pay cut, dropping from about €45m basic, after-tax, to closer to €20m.

Sometimes last year, Messi made an attempt to leave Barcelona, after a breakdown in his relationship with then president Josep Maria Bartomeu but was forced to stay. Now, when he was keen to continue for longer, it appears he is being made to go. Barcelona’s salaries currently account for about 110% of their income and their president, Joan Laporta, has admitted: “We do not comply with financial fair play regulations.”