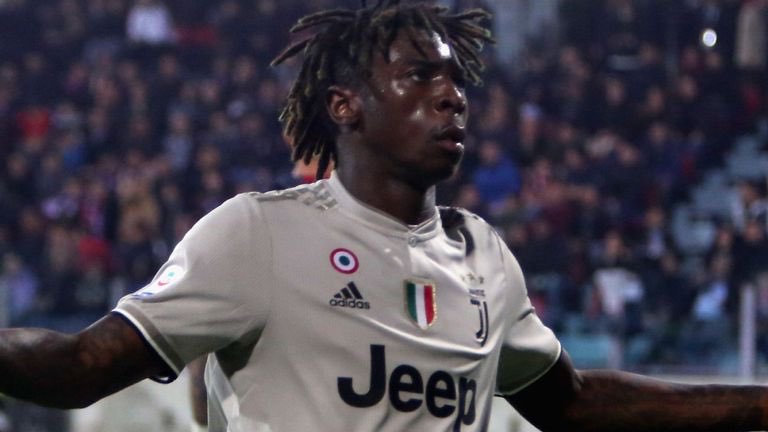 18-Year-Old Italian Striker and Juventus FC forward Moise Kean was subjected to racist mockey abuse ” Chant ” by the Cagliari Fans yesterday match between the Seria A leader and the struggling team, although he later scored his team winning goal, and he stance of defiance.

The Italy international was abused all night by sections of the home support, with monkey chants aimed at him, but had the final say by netting Juvetus’s second goal with five minutes left. The teenager stood at the post, his arms aloft in response to the chants.

The best way to respond to racism 🦍 #notoracism 🚫

Moise Kean got racistically abused at Cagliari, scored and then gave this reaction. Kid has a strong mentality. pic.twitter.com/9NDrXajfOk

Italian teen Moise Kean is subjected to racist chants throughout a match. He scores and celebrates like this in the 85th minute.

His manager: “He should not have celebrated in that way”

His captain: “The blame is 50/50.”pic.twitter.com/efzLNmCdmP

Kean fellow teammate Leonardo Bonucci insisted that Moise Kean must take “50-50 of the blame” after being racially abused by Cagliari fans in Juventus’ 2-0 victory, while the Juventus manager Massimiliano Allegri felt teenage forward Moise Kean should not have responded to the racist chants – but called for the “idiots” responsible to be handed lifetime bans.

“He shouldn’t have celebrated in that manner,” he said. “You need great intelligence to deal with these situations and should not go to provoke people. That, of course, does not mean the idiots in the crowd and the way they reacted should be justified.

“Kean knows that when he scores a goal, he has to focus on celebrating with his teammates. He knows he could’ve done something differently too,” Bonucci told Sky Sport Italia.

“There were racist jeers after the goal, Blaise heard it and was angered. I think the blame is 50-50, because Moise shouldn’t have done that and the Curva should not have reacted that way.

“We are professionals, we have to set the example and not provoke anyone. “I prefer to talk about the great performance. We were aggressive on the wings, as we knew they could cause problems with crosses.