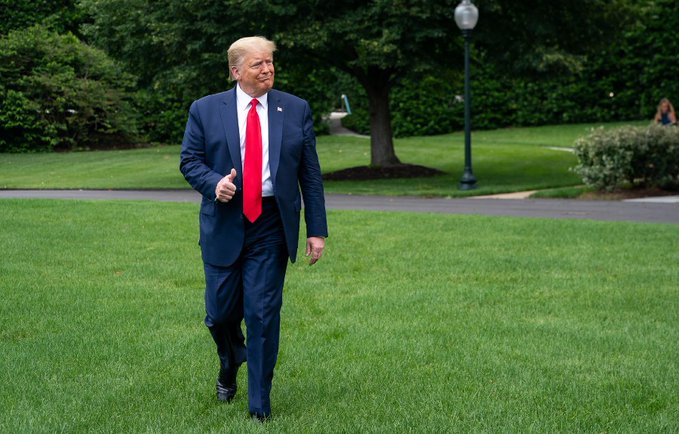 Hey all, What did you think about The Internet World Without Former President Donald Trump?

Former President Donald Trump officially stopped being the leader of the United State of American, on Wednesday, but it feels like he really left office a few weeks ago. That was when Facebook Inc. suspended Trump’s account and Twitter Inc. banned him. At that point, many Americans simply stopped hearing from the president on a daily basis.

Trump’s influence on online discourse has been massive. His combative approach coupled with his tendency to mislead his followers has inspired division and forced companies like Facebook to more proactively fight misinformation online. I don’t know how the end of Trump’s presidency will impact America, but there are already signs his departure is impacting social media.

On Twitter, for example, the number of posts featuring keywords used to push misleading election fraud claims decreased significantly following Trump’s ban on Jan. 8. The week before Trump’s account was removed, there were 2.29 million mentions of election fraud, compared to just around 606,000 the week after—a 73% decline, according to Zignal Labs, a social media measurement company.

On Facebook, the use of the term “stop the steal” has declined slightly since Trump’s suspension, according to data from the Facebook-owned analytics tool CrowdTangle. In the week of Jan. 10, about 7,700 public posts on Facebook used the term, compared to 10,600 posts the week before, when violent rioters stormed the U.S. Capitol, CrowdTangle shows.

Of course, it’s not just Trump. Both Twitter and Facebook have also been banning accounts linked to the QAnon conspiracy theory in the days following Trump’s ban. Twitter alone recently removed 70,000 of those accounts, which likely played a significant role in the decrease in election fraud claims on the service.

Twitter CEO Jack Dorsey said that bans by social media companies on Donald Trump after last week’s violence were encouraged by each other’s actions even though they were not coordinatedhttps://t.co/A4eHpmTUta pic.twitter.com/HWoc0HlBQc

Other changes are more profound, though it’s unclear how long they’ll last. For example, the gap between how much users interact with right-leaning Facebook Pages and left-leaning Pages online has narrowed, even though right-wing Pages still outperform.

Engagement with right-leaning Pages—including likes, comments, and shares—accounted for 47.5% of all engagement on U.S. political Facebook Pages in the week leading up to Trump’s suspension on Jan. 6, according to data from Media Matters for America, a non-profit that monitors conservative media. Left-leaning Pages accounted for just 25.3% of all interactions in that time period.

Is this the beginning of Facebook’s political leveling? It’s much too soon to say, and it’s difficult to draw too many conclusions about the road ahead from social media interactions during a two-week stretch that included a Capitol riot, an impeachment, and an inauguration.

But perhaps the biggest indicator of Trump’s social media silence has nothing to do with data. Joe Biden’s inauguration went off without a hitch on Wednesday. There were no visible, large groups of protesters claiming he stole the election, or conflicts among voters on the National Mall. There isn’t any data to prove it, but the smooth inauguration Wednesday may be the greatest indication of all that Trump’s social media silence is having an impact.

Continue Reading
Advertisement
You may also like...
Related Topics:Donald Trump