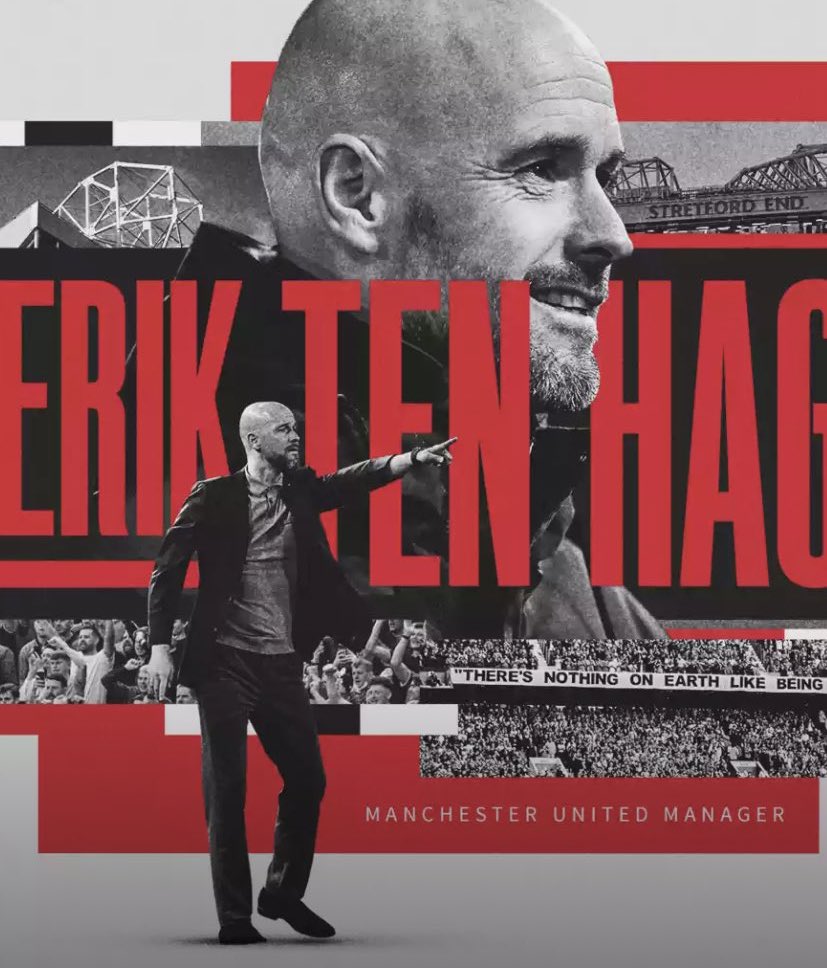 The current Ajax coach and Dutch international, Erik Ten Hag, will take over as Manchester United‘s new head coach ahead of the 2022-23 season.

Erik ten Hag has been named Manchester United‘s new manager, and he will take over at Old Trafford at the end of the current season.

He will take over from interim manager Ralf Rangnick, who has been in charge since Ole Gunnar Solskjaer was fired in November.

Ten Hag was appointed manager of Go Ahead Eagles, a team in the Eerste Divisie, in 2012. (Second Division in Netherlands). He only stayed for one season, but during that time he led the team to its first promotion in 17 years.

In June 2013, he was assigned to Bayern Munich Reserves as his next assignment. He worked closely with Pep Guardiola, who was then the first team manager in Munich, during this time.

He returned to the Netherlands after two years in Germany and became the sporting director and head coach of FC Utrecht. He joined Ajax in 2017 and led them to the 2018-19 UEFA Champions League semi-finals.

His team defeated defending champions Real Madrid in the Round of 16 and Juventus in the quarter-finals before losing in the final four to Mauricio Pochettino’s Tottenham. Pochettino was, in fact, one among the candidates for the United post.

How many trophies has Erik ten Hag won?

Hag has five trophies to his name, all of which he has earned while playing for Ajax. The KNVB Cup was his first management trophy, which he won after defeating Willem II in the final. He also won the league, completing a domestic hat trick.

Ten Hag also holds the record for being the fastest coach to reach 100 wins in the Eredivisie, having done so in just 128 games.

Everything You Need to Know About, Erik Ten Hag, His Football Philosophy, Tactics, Trophies Won & Club Coached Before

Erik ten Hag prefers his side to keep possession of the ball. He is aggressive and appears to be in command of the game, since he has a lot of possession. He has shown open admiration for Guardiola and claimed that his philosophies have influenced his coaching mentality.

” In learned a lot from Guardiola,” Ten Hag said in February 2019. “His philosophy is sensational, what he did in Barcelona, Bayern and now with Manchester City, that attacking and attractive style sees him win a lot. “Bayern have become my club. Since Pep, football in Germany is different, I looked at almost every training back then, and I took a lot of methodical lessons on how to transfer his philosophy to the pitch.

“I want to have possession and hurt the opponent. It’s about possession, about movement, about vertical attacking patterns, about pressing, wingers moving into the middle to make room for the full-backs. Everyone is attacking, everyone is defending. It’s this structure that I’ve tried to implement with Ajax.”

Ten Hag’s favoured formation was a 4-4-2 with a diamond in midfield throughout the early years of his coaching tenure before switching to a 4-3-3.

Who is Erik Ten Hag? Everything You Need to Know About, Erik Ten Hag, His Football Philosophy, Tactics, Trophies Won & Club Coached Before

Now, he prefers a 4-2-3-1 formation, which will be familiar to United’s current players because it’s the same system that former manager Ole Gunnar Solskjaer utilized and that interim manager Ralf Rangnick has also belatedly decided on.

Ten Hag also likes to pay attention to the tiniest details, such as the length of grass on the pitch.

“Behind every training session, there was an idea,” Marnix Kolder, Go Ahead’s captain at the time, told the Independent.

“He makes every player better. Tactical, physical. Erik left nothing to chance. He was prepared for every opponent, down to the last detail.”

“Every morning he’d go to the pitch to see if the grass was high enough,” added retired midfielder Sjoerd Overgoor.

Jurgen Klopp, Liverpool’s manager, holds him in high regard.

“Erik [ten Hag] is rightly regarded as one of the most exciting coaching talents in world football at the moment because of the work he does with Ajax,” Klopp said in December 2020.

“Of course, it is a wonderful club – one of the stellar names of European football – but in this moment it is clear they have outstanding leadership of the organisation and Erik is a big part of that.”