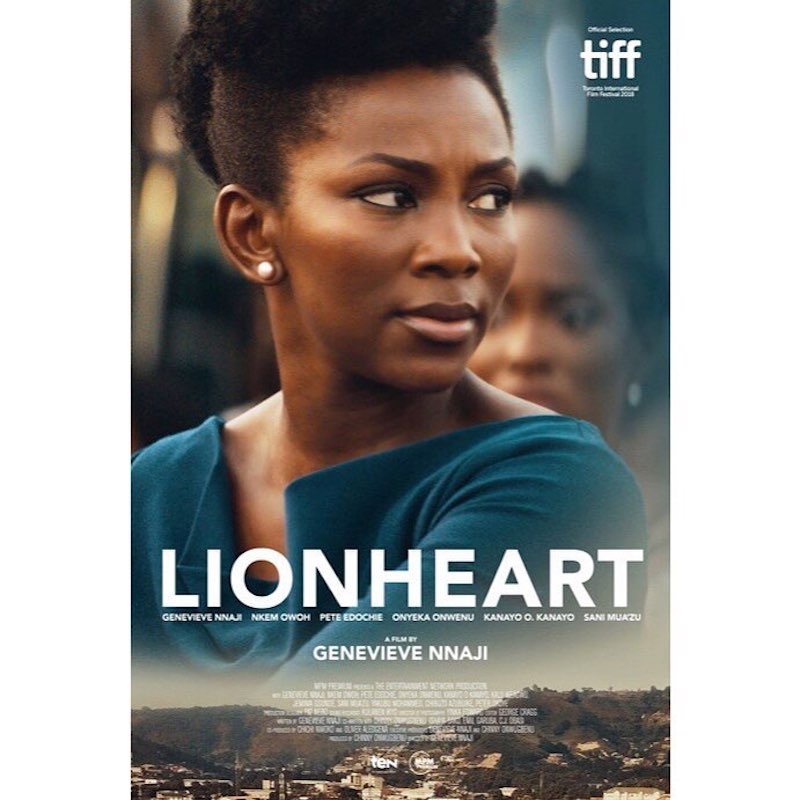 Hehehe Guys, If you’re among Nigerian cinema movie-goers that which to watch the highly anticipated Genevieve Nnaji‘s ” Lionheart ” in this holiday season, you still need to wait because it won’t show at various cinema’s in Nigeria because of something we can describe as a case of ego or entitlement between Genevieve Nnaji and FilmOne Distribution.

Just few weeks ago, online movie streaming giant Netflix acquired the full right of Genevieve Nnaji’s ” Lionheart ” movie as part of its original licensed content. After the Netflix achievement by the Lionheart team, they are planning to distribute the film across all cinemas in Nigeria for the festive holiday season, but they are meeting a stumbling block with the distribution company FilmOne.

In a simple summary based on the statement made to the public by the parties, Genevieve alleges that FilmOne is attempting to block the distribution of ‘Lionheart’ on a merit-less basis, which can reference to egoism.

However, FilmOne, on the other angle, has counter-attack the allegation with a painted story of a popular actress feeling entitled and not playing by the rules.

Here’s Official Statement of Genevieve Nnaji over the blocking of ” Lionheart ” In Nigeria Cinemas.

“Lionheart has been a big teaching moment for me as a filmmaker. It has surpassed my wildest dreams and expectations. Showing at film festivals across the world and getting acquired by Netflix has been surreal. Not to mention the many doors it has opened for me to further explore film and creativity in my truth as an African female filmmaker. And for all of these, I am grateful to God and to you all for your unwavering love and support. I have been truly blessed.

“But in all of these, getting to finally show my directorial debut to you all has given me more butterflies in my stomach. After all, it was originally created for your consumption. And from the initial reception to the release date, it is clear the feeling is mutual.

“Unfortunately, not everyone shares our enthusiasm. It is sad to discover that the very people who pose as Nollywood supporters and promoters of their content are the very same people frustrating the efforts of filmmakers.

“FilmOne, one of the major film cinema distributors, has categorically refused to distribute Lionheart, primarily because they have no stake in it. They are currently invested in a couple of movies showing in the cinemas and want to protect their assets at all cost. Monopolizing the market this season is their strategy to recouping their investment.

“Silverbird agreed to exclusively exhibit Lionheart across their cinemas and that was good enough for me. Like I said, having you watch this movie was my primary objective, not making more money. I’m an artist who wants to display her work to the people the art was created for.

“But, as soon as the announcement was made on Friday about the release, the “powers that be” of distribution and marketing were not having it. They proceeded to arm-twist Silverbird cinemas to backing out of our agreement by threatening to boycott them in the future.

“It is clear to me that the interest of the consumers is not of utmost priority as advertised. These cinema chains are only here to make money off of struggling artists while protecting their investments in the films they are affiliated with.

“The major reason cinema chains globally do not produce their own movies is to avoid bias. Competing with the very people you are supposedly a distributor for is downright ridiculous and shameful, to say the least.

“It is not enough that they buy out their own tickets and manipulate the numbers and time slots to keep up this false imagery of making box-office hits. They prevent filmmakers from releasing their products to manipulate foot traffic as well. Thereby forcing consumers to watch only that which is available to them. Not what they actually want to see.

“It sickens me to think that if this could be done to me (twice if I may add), then I can only imagine what many struggling independent filmmakers must be passing through in the hands of these industry vultures.

“I call them vultures because they are a bunch of opportunists, and they prey on the weak. If the only success stories you can boast of as a distributor are movies you invested in, then how are you a supporter for the industry at large?

“To be honest, as an investor in this project, I have no complaints. I am happy with the progress I have made and remain grateful for how far I have come. But as an artist, having you watch my first-time film as a director meant a lot to me. Plus, I am aware of the challenges of streaming in this region, so bringing this home to you was important. Unfortunately, the cinemas have refused to show Lionheart. “Despite all my efforts, they remain insistent. I don’t own a cinema chain of my own so my hands are tied.

“Lionheart will be waiting for you starting January 4th on Netflix. I hope you are as proud of it as I am.

“Hi all, as cinema exhibitors we have processes that guide us when considering a movie for exhibition in the cinema.

“We expect the movie to come from a licenced distributor, we expect the movie to be given adequate run time in the cinemas before it is officially released on other platforms and also for our cinemas to be provided with adequate notice for the inclusion of the movie in an increasingly crowded calender. It is clear from the approach taken by the Lionheart team that these processes were not adhered to and most of our members rightly refused to take the movie.

“It is also important to note that this movie had been signed up by Netflix months ago, thereby giving Genevieve’s team ample time to secure a spot on the calender, an option they did not take until quite recently thereby ensuring the possibility of the movie not being shown by cinemas during their preferred date.

“Genevieve has starred and produced movies for cinema exhibition in the past so should be familiar with the way the industry works which is why this is a cause for concern for us in the cinema association.

“Finally it’s worth pointing out that other movies such as Chief Daddy, KOB and Merry men had all been slated from early March this year. Mo Abudu, AY and Kemi Adetiba who are industry compatriots of Genevieve’s followed the right approach by scheduling early for cinema release, it’s not fair that they may now possibly have their screen times reduced because of the rushed inclusion of Lionheart in the cinemas.

“We at the cinema association are also not pleased about the attacks in the statement on some of our members and the sweeping generalisations the statement makes and expect to seek further clarification from its author before determining if further action needs to be taken.