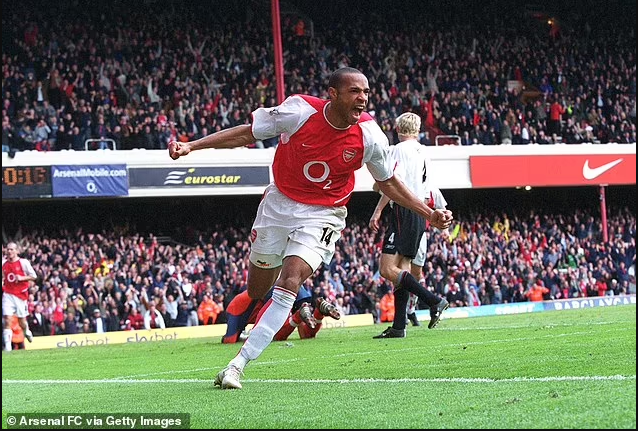 According to a study of soccer fans, Former Arsenal striker & France international, Thierry Henry was named the best player to ever play in the Premier League.
Ahead of the Premier League’s 30th anniversary, Betfair and YouGov surveyed over 1,000 football fans to determine the finest player of that era.

The Frenchman received 15% of the vote, beating out players like Mohamed Salah and Cristiano Ronaldo to win the honor. Henry is an Arsenal great.

The former striker led the Gunners to two league titles, including the much-heralded “invincible season” in 2003–04. He scored 175 goals in 258 Premier League games.

Cristiano Ronaldo of Manchester United came in second after receiving more votes from voters in the 45–54 age bracket than any other player.

With the Red Devils from 2006 to 2009, Ronaldo amassed 102 goals in 226 Premier League appearances and won three consecutive league crowns.

Alan Shearer, the all-time leading scorer in the Premier League, finished third, and Steven Gerrard and Eric Cantona rounded out the top five.

The iconic striker amassed 260 Premier League goals over the course of a glittering career and outscored Wayne Rooney, who is currently second on the all-time goals scored list, by more than 50 goals (208).

The Egyptian international, who made 254 appearances for Jurgen Klopp’s team, finished eighth in the poll after tallying an impressive 156 goals.

Nevertheless, there is a perception that Salah, who recently committed to a long-term contract at Anfield, may finish his career on a brighter note.

The only other active player in the top 20 of the voting, outside Ronaldo and Salah, was Kevin De Bruyne of Manchester City.

The midfielder, who placed eighth overall, has helped the Citizens win four of the previous five Premier League championships. And as City begin their title defense against West Ham on Sunday, the Belgian will be looking to add to his total.